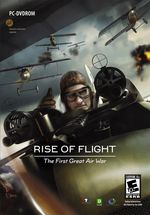 777 Studios have released their Update 1.019 to Rise Of Flight. A lot of improvements have gone into this version such as the new career mode, a revamp of the graphics system including Nvidia SLI and ATI Crossfire support (see graphics primer on RoF Forums), two new mission types with artillery spotting and aerial reconnaissance, and a new flyable plane, the Breguet 14B.

The new career mode took the RoF Team quite a lot of time and resources to implement. For those of you who have already used Pat Wilson's excellent third party add on 'Rof Campaign' you will see if the internal new career mode brings you any enhancement over what you already used for a long time. Mind you that RofCampaign was developed 'single-handedly' in his free time by Pat Wilson. The new career mode is described by the developers as follows:

Finally, the main star of this update is the new Career Mode, which was the main goal of this update after months of difficult development. It was a concept in our heads from the very beginning and we are finally able to release it only after 2 years of further development. As you can see a project like ROF is not easy and takes time. This is a very unique mode of gameplay. It has no set beginning or set end and total gameplay time of the new Career is easily few thousand hours. It includes elements from books, diaries, biographies and military history. It creates an excellent foundation or plot, which in addition to your imagination can make a sort of memoir with narrative bibliographic depth and accuracy. Before we began making a WWI sim, when we were game players in the community like you, we were reading memoirs of pilots, imagining all of the dogfights vividly as if we were there participating in each fight by ourselves. The aim of our work in the new Career Mode was to create a sort of "memoir generator" for you. Now you can create unique experiences and complex or simple fates for pilots who can to become legends or simply die in the first air battles under your command. On the other hand, all players of the new Career mode will be united by common conditions and will be able to see each other's achievements as the progress in a squadron. Even with identical initial conditions each pilot’s virtual life will be unique and no two Career paths will be identical.

GENERAL FEATURES:
1. New Career game mode has been added
2. Autumn season has been added to Quick Mission and Career modes. It is also available for you to use in your own custom missions.
3. Western Front map now has 259 new towns/villages and 159 troop encampments placed with corresponding ground textures.
4. Field Mods added to planes cockpits.
5. New Settings Tool added, with additional News Feature
6. Breguet 14.B2 is now available as a player controlled aircraft
7. Time acceleration now supports 16x speed. (Please be aware that you will need a powerful PC to achieve this).
8. Support for 64 button Joysticks.
9. Multi-GPU support option (SLI/Crossfire) has been added. Only use this if you have a SLI/Crossfire setup. 10. Community historical skins pack vol.7 was approved, it includes 82 historical paint schemes, many of them (same as many other from other volumes) are used in new Career.
11. Community fictional skins pack vol.7 was approved, it includes 335 fictional paint schemes

GRAPHICS FEATURES:
12. Super Sampling option added to graphics settings (Please be advised that this has a massive impact on FPS. Therefore we only recommend this option is selected for use on high end SLI/CF systems or the very latest and powerful video cards.
13. Draw distance option has been added. This relates to Dynamic Objects, Buildings and Explosions (The 50 setting approximates to the normal 1.018 Drawing Distance; At MAX setting planes may be visible at 8500m (instead of 6000/2500m at max/min FOV before) at any FOV, vehicles at 5000m (instead of 3500/1000m) at any FOV, Big Building Blocks at 9500m on narrowest FOV (compared to 6000m in 1.018)
14. Dynamic Objects (e.g. planes, vehicles, balloons and explosions) draw distance no longer depends on your zoom setting.
15. Buildings will now fade into view.
16. Forest draw distance now has 2 additional options
17. Foggy weather has been added (mornings and evenings in Quick Mission and some days in Career. In addition you now have ability to set foggy conditions in the Mission Editor)
18. Muzzle flash as a light source has been added.
19. Sky Dome dither has been added, now there are smooth colour transitions in the Sky Dome.

AIRPLANES FEATURES:
20. All the planes 3D models have been updated. For a full change log, see below.
21. New fuel leak effect (a bit green and heavy) and new coolant leak effect (white and light) added.
22. All the planes engine exhaust effects have been tweaked. Now it is much more noticeable. A wrong mixture setting will result in light-gray exhaust and engine damage will result in a dark-gray exhaust.
23. DFW C.V Artillery Spotting mission has been added
24. Low ambient temperatures now cause difficulties with engine start. So be quick about it when starting your engine in winter, especially when "warmed up engine" option is not ticked.
25. DFW C.V has new RADIO and PHOTO payloads which are visible in the rear cockpit and are needed to perform certain missions in the new Career Mode.
26. SPAD 13.C1 now also has a PHOTO payload and is be able to fly photo recon missions in the new Career Mode.
27. S.E.5a, Sopwith Camel, Sopwith Dolphin will only carry a bomb rack when bombs have been selected.
28. German liquid bank indicators now feature correct physics and movement. Rather than indicating bank they are employed more as a slip indicator, just like the real thing.
29. Plane Damage no longer affects the ability to drop bombs.

MISSION SCRIPT FEATURES:
30. Translator Next Mission was added, it works in Multiplayer and it shifts missions rotation order to the mission which was pointed at in the latest triggered TRA_NextMission
31. Time of Day trigger was added, it provides several types of events depending on time of day after it was first time triggered. It also provides SUNSET event when triggered if the time is between Sunset and Sunrise, and vice versa for SUNRISE event (night/day may be determined at each moment of mission). Default daytime config is located in the data\templates folder.
32. Simulation Mute function was added to TRA_Media, it works in MP also. You can set mute time and required relative volume there.
33. Play Sound function was added to TRA_Media. As opposed to TRA_AnimatioOperator, it can play .mp3 files in multiplayer also (be sure that the related .mp3 is correctly stored in the .list file).
34. Trucks, tanks, ships, artillery, locomotives, firing positions, balloons and planes may now fire a signal flare of specified colour using Mission Script command CMD_Flare.
35. "Spawn at me" parameter for TRG_Spawner (which enables a proximity trigger with spawned objects, and also enables you to spawn one object in different places).
36. TRG_Delete deletes objects without destroying them. It completely removes (as opposed to just deactivating) objects like planes, baloons, ships, vehicles, firing positions and trains (but not buildings!).
37. Airfields now restore landed planes if they correspond to the current airfield plane set and country as long as the "Return friendly planes" option is enabled for the airfield in question using the Mission Editor.
38. Mission format now has a fuel setting for planes. We will add fuel payload controls to Career and Quick Mission modes later. Same for fuel load lock in server options, which will also be added at a later date.
39. Missions now supports up to 15 secondary objectives for each coalition.
40. OnFlashDialogAction events number was increased to 16.
41. External flash dialogs may now be operated by players in multiplayer (events activating from any player input), in the next version they will be able to use some specific parameters (playerName, playerPlaneName, playerPlaneModel, playerCountry, playerCoalition, playerAlive, playerPayloadName, playerPayoadID, playerFuel, playerSpeed, playerAltitude, playerSpeed, playerXPosition, playerYPosition, playerZPositon, playerOnLand)
42. Images may now be displayed in multiplayer

OTHER FEATURES:
43. Head motion due to g-forces was added, there is now a slight view displacement while maneuvering (especially noticeable when centering on the iron sights)
44. Plane name is now displayed in the airfield plane selection dialog
45. Sounds sources option for 128 channels was added
46. Moon size was reduced
47. Objects counter was added to the Mission Editor
48. Balloon strength was increased, you now need to fire long bursts from less than 300m to fire them up
49. Howitzers are now able to fire over long distances of more than 5km

As this is a big update with approximately 650 MB of files make sure to have a backup copy of your current RoF install to avoid hassles during the update process. If the update should fail you always can go back to the last version.

For full details see this blog post by RoF's Project Manager Loft and also the update announcement by Han, Community Manager for RoF.

I'm ready to call RoF the best flightsim ever...

Truly beautiful graphics. Just look at the pics.
The FM is second to none. Feeling of flight is phenomenal...for a home computer.
Study sim quality aircraft, and lots of them!
And now with a career that works this well even in beta status...

These are great times my fellow flightsimmers! :-)